Mark this post as the official revival of my blog. There are only a few things in life that have the capability to inspire me to dig up an old website, sift through every internet password I’ve ever used until eventually finding the right one, and then actually write something. One of those things, however is the U.S. Grand Prix of Cyclocross presented by Crank Brothers. I spent the past weekend in Louisville, Kentucky, where we were greeted by great weather, awesome fans, and an incredible race to boot.

I’ll start with a brief crash course for those of you who are unfamiliar with ‘cross. Take a road bike, put some thicker tires on it, switch out the brakes to allow more clearance for mud, and you essentially have a ‘cross bike. Next, take said bike, and race it for around 40 minutes on a course incorporating varying terrain and features, including pavement, grass, mud, sand, and just about anything else you can think of. Throw in a few obstacles in which you have to dismount to get past, like barriers or stairs, and you are on your way to understanding a ‘cross race. Here are a few pics to help.

After you jump over the barriers on foot, its all about how fast you can get back on the bike.

Next, you have things like “The Green Monster,” unique to the Louisville USGP course. 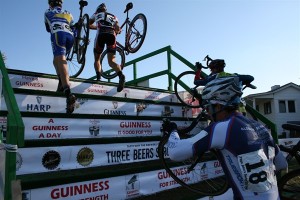 They threw in a sand trap just to keep things interesting.

And for the majority of the race, racers are on grass like this.

Starting to make a little bit of sense? If you have never seen a race, its unlike anything you can imagine. The atmosphere at a ‘cross race in indescribable, unique in the sporting world. Lead changes everywhere, the potential for a crash at any second, and speed that you can’t imagine. Inspired yet? Go watch a bike race!

Hi, I'm Brad. I'm a professional announcer for all kinds of sports, with a specialty in professional cycling. END_OF_DOCUMENT_TOKEN_TO_BE_REPLACED
This entry was posted on Wednesday, October 29th, 2008 at 3:56 pm and posted in Uncategorized. You can follow any responses to this entry through the RSS 2.0 feed.
« Grandview
Are we there yet? »